Intensive care unit availability in the Bay Area jumped to 23.4% on Saturday after weeks of single-digit availability, a strong signal that the worst of the surge is in the past.

Nonetheless, it was not immediately clear when the region could emerge from the state’s stay-home order. The order is supposed to be lifted when ICU availability is projected to exceed 15% looking four weeks ahead.

The Bay Area, which includes the nine core counties as well as Monterey and Santa Cruz counties, is well beyond that threshold at the moment.

The 13-county Sacramento region had its state-imposed lockdown lifted more than a week ago. But the ICU capacity for that region remains at 11.9% — just over half the Bay Area’s current figure.

State public health officials could not immediately be reached on Saturday to comment on when the lockdown might be lifted for the Bay Area, and why the Bay Area remained on lockdown while Sacramento — with worse ICU numbers — was not.

The numbers are looking good, Matt Willis, Marin County’s public health officer told The Chronicle on Saturday, adding he’s hopeful the Bay Area lockdown will lift in the near future.

“It’s the state’s call,” he said. “But we’re all looking at the same numbers and we’re all feeling hopeful.” 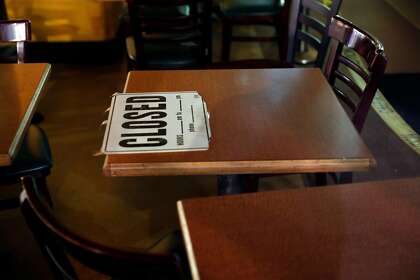 “That means for every person who gets COVID-19, on average they’re passing it to less than one other person. We’re slowing the spread,” Breed wrote on Twitter.

That means for every person who gets COVID-19, on average they’re passing it to less than one other person. We’re slowing the spread.

If this continues, we could soon start reopening under CA’s guidelines.

Lifting the lockdown would allow the Bay Area to resume activities permitted under the state’s purple tier, including outdoor dining. Outdoor gatherings with people outside your household could also resume — though with a three-household-max restriction. Hair salons could resume serving customers indoors. However, individual counties could decide to continue to continue to prohibit some of these activities, separate from the state’s orders.

California health officials use a complex formula that has not been made public to anticipate ICU availability four weeks out. “At the moment the projections are not being shared publicly,” Department of Public Health spokeswoman Ali Bay said in an email to the Associated Press.

When the Sacramento region’s order was lifted, the ICU availability was at about 9%.

The lack of a state explanation has created confusion, and that’s the opposite of what the state should be doing, said David Canepa, president of the San Mateo County Board of Supervisors.

Information should be “clear, concise and most importantly have to avoid confusion,” he said.

“My concern is that the public will hear this and think it’s safe to go out with a business as usual attitude,” he said. “I too would like to dine in at my favorite restaurants, but for now I will stay at home and order takeout. If we can keep these numbers down over the next month, then I say bravo. I’ll be the first in line to get a haircut at the barbershop.”

“In the meantime,” he said, “stay home if you can, avoid gatherings and wear your damn masks.”

This story is developing.