The singer/songwriter, known as the “Paul” in the ‘60s folk trio Peter, Paul and Mary, recently released “Just Causes,” a compilation of 15 songs, each highlighting a theme of social concern, including the environment, hunger, and drug trafficking, among others. The star paired each song in with an appropriate non-profit organization to benefit from the album’s net proceeds.

And Stookey is no stranger to singing for a good cause. The group’s version of “If I Had a Hammer” became an anthem for racial equality. The band famously performed Bob Dylan’s “Blowin’ in the Wind” at the August 1963 March on Washington. They also protested the Vietnam war and joined the fight to improve the working conditions of California’s farmworkers – just to name a few.

KATHY IRELAND ON LAUNCHING A MUSIC LABEL, FACING REJECTION AS AN ENTREPRENEUR: ‘IT DIDN’T DESTROY ME’ 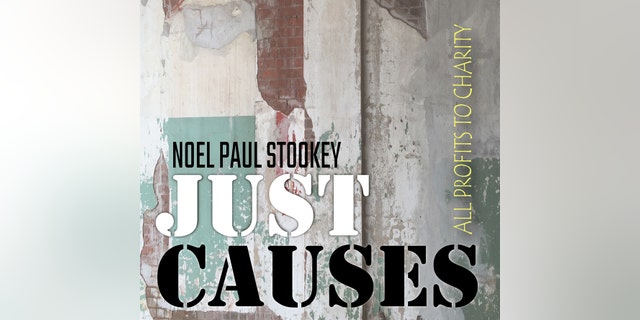 ‘Just Causes’ is a carefully curated compilation of 15 songs by Noel Paul Stookey. Each song features a theme of social concern, including hunger, drug trafficking and the environment, among others. <br>
The legendary folk singer has paired each song with an appropriate designated non-profit organization to benefit from the album’s net proceeds.

Stookey spoke to Fox News about releasing “Just Causes,” his favorite memory with Peter Yarrow and Mary Travers, the real story behind “Puff the Magic Dragon,” and becoming a born-again Christian.

Fox News: What can audiences expect from “Just Causes”?
Noel Paul Stookey: You know, it’s not the release so much. It’s what it’s about. That really gets me up and going on a lot of levels. I was just a young kid from the Midwest who fell in love with rhythm and blues. I had my own band in high school and played guitar. And Greenwich Village was a wake-up call with the music of Pete Seeger, Woody Guthrie and Josh White.

I’ve been learning. I’m a slow learner. I’ve been learning over the last 50, 60 years *laughs*. But I’ve come in contact with some really wonderful people at some really wonderful moments like the March on Washington. It awakened me. It awakened all of us. My particular form of expression has always been music, whether it’s making up romantic songs in high school or bringing the mission of my heart to fruition.

SACHEEN LITTLEFEATHER, WHO REJECTED MARLON BRANDO’S OSCAR IN 1973, SAYS SHE WAS BLACKLISTED BY HOLLYWOOD 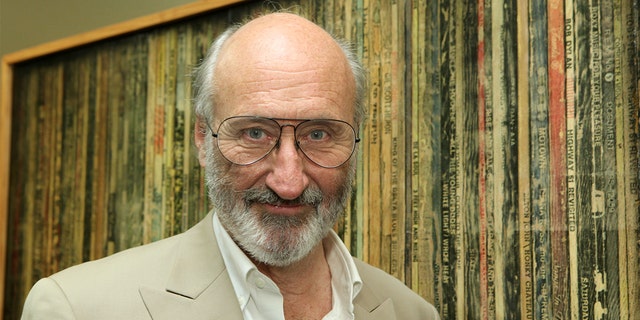 Fox News: How did you choose the songs and the charities that you wanted to support in this album specifically?
Stookey: A lot of the songs that I’ve written were, first of all, about awareness. Not a lot of them are story songs, but after 50 years, there were 15 that were pretty obviously connected. For example, “Jean Claude” was a song about two boys caught up in the Nazi occupation of France.

There’s also “Tom Quick,” a song about America’s indigenous people. I was really touched by the First Nations Development Institute, which works to improve conditions for Native Americans. They provide grants and training. So I thought that really worked. And “The Connection” works with Partnership To End Addiction… There’s a need for families to get to the heart of the matter in terms of the addict’s needs and desires. And to provide support for those families.

TONY ORLANDO RECALLS HOW FAITH HELPED HIM COPE WITH PERSONAL TRAGEDIES: ‘I WAS ASHAMED OF DISAPPOINTING GOD’ 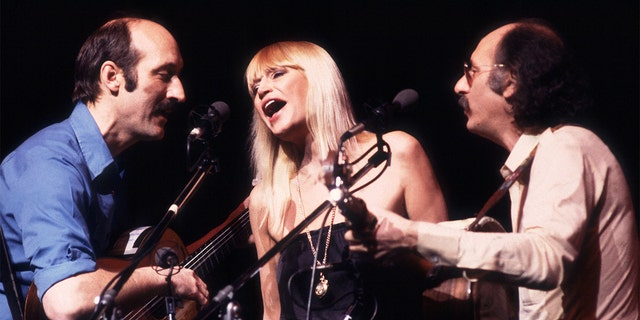 Peter, Paul and Mary, circa 1983 in Chicago.
(Photo by Paul Natkin/WireImage/Getty Images)

Fox News: Do you think that artists like Bruce Springsteen can carry on the tradition of folk music that you, along with Peter and Mary created in the ‘60s?
Stookey: Oh for sure… I know he plays acoustic guitar and he’s been on Broadway. And I know there are other folkies who are easily more identified by people because they play acoustic guitar.

But the impact of folk music in the ‘60s was much more about the message than it was about the style. Even The Beatles reminded us of the fact that we are a community of human beings and we share concerns other than just romance. And that has an impact. It’s certainly evident in hip hop and rap, particularly in the early years. 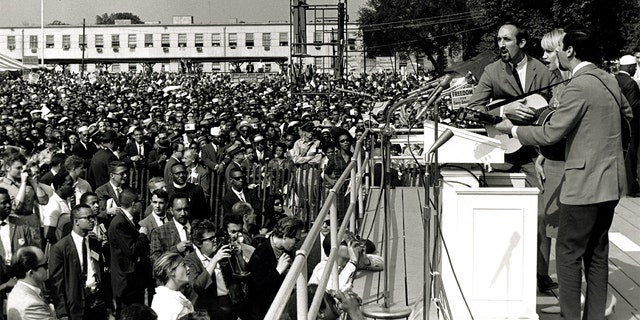 American folk and pop group Peter, Paul and Mary perform during the March on Washington for Jobs and Freedom, Washington DC, August 28, 1963. The trio behind the microphone features, from left, Paul Stookey, Mary Travers (1936 – 2009), and Peter Yarrow. The march and rally provided the setting for the Reverend Martin Luther King Jr’s iconic ‘I Have a Dream’ speech.
(Photo by Rowland Scherman/USIA/PhotoQuest/Getty Images)

Fox News: What’s one memory from your time with Peter and Mary that still makes you smile whenever you think about it?
Stookey: That’s funny. If you hadn’t included the word “smile,” of course, I probably would have said the March on Washington and standing with Dr. King when he gave us the “I Have a Dream” speech. But the memory I have, the one that gives me the biggest smile, was when the three of us dressed formally following a celebration of John F. Kennedy’s second year as president.

We headed for a party at Lyndon Johnson’s house, the vice president. Carol Burnett was there dancing. The president was singing along arm-in-arm with Gene Kelly who also did some tap dancing for us. Jacqueline Kennedy was flirty with Yves Montand. And the president was very personable. But the smile comes from being in the backseat of the limo that was going about 60 miles an hour through D.C. neighborhoods behind police escort. I mean, what were these three kids doing in this limo? So that was a fun moment for all of us.

I remember the president graciously came over to each of the performers to thank us personally. I remember he asked, “What was the name of that song you sang when everybody applauded? They seem to know the lyrics and wanted to sing along as well.” The song was “If I Had a Hammer.” Well, Peter tried to explain that the song was popular and it was released as a single. Then he tried to describe what a 45 was. The president just smiled and said, “Yes, yes, I know what a 45 is. I just don’t get much of a chance to listen to the radio while driving to work anymore.” It was a beautiful moment.

ANN-MARGRET REFLECTS ON ‘VIVA LAS VEGAS,’ VISITING TROOPS IN VIETNAM: ‘BEING WITH THEM HAS BEEN IN MY HEART’ 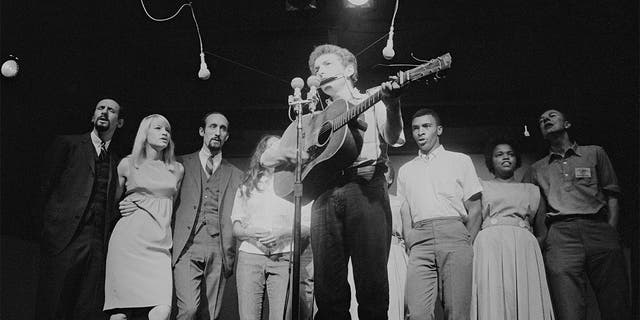 Fox News: “Blowin’ in the Wind” was written by Bob Dylan, but it was Peter, Paul and Mary that truly made the song world-famous. How did he feel about the group covering the song?
Stookey: Oh, Bobby and I went back a year or two before the trio got together. I was master of ceremonies at the Gaslight Café and he was a passing through singer/songwriter. So we had a very comfortable relationship. As a matter of fact, he wrote the liner notes for our third album. Everyone was involved with folk music and we all showed up to support each other.

We lived in each other’s backyard. Sang each other’s songs. Learned from each other. We shared and shared. After you finished a set you would either spend time with the other folkies or go to the next show to see and hear what the other artists were doing. So there was a very strong involvement.

Fox News: What’s the story behind “Puff the Magic Dragon”? There are many theories that still exist about that song.
Stookey: I think that poor Puff was a victim of his times for a bit *laughs*. When Peter wrote the additional verses, it was obviously about this little boy who had grown up and no longer believed in Puff. It was about a boy coming of age. But the times in which the song was released gave you a window of interpretation.

‘HOLLYWOOD SQUARES’ HOST PETER MARSHALL, 95, RECALLS HIS BATTLE WITH COVID-19: ‘I WORRIED I WOULDN’T MAKE IT’ 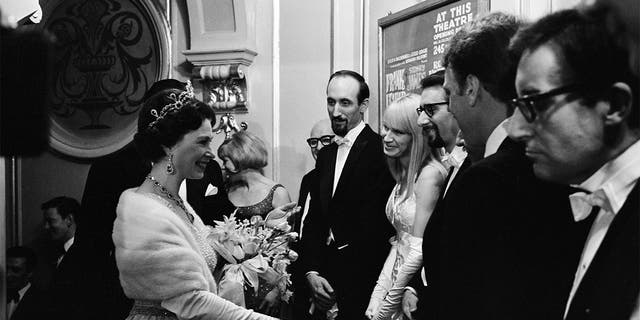 Peter went on stations and gave examples of how “The Star-Spangled Banner” could even be interpreted as a song about drugs. But unfortunately, it didn’t stop the rumor. And in some ways, it crippled sales. I believe it was either Hong Kong, Shanghai or Singapore, but they refused to play it because they felt it was about drugs. But it wasn’t and it never was. But the song still brings people joy.

Fox News: You became a born-again Christian in the late ‘60s. How did that influence your songwriting in any way?
Stookey: Oh, it completely changed my songwriting… I had a turnaround in the late ‘60s and the impact was pretty incredible. You have a whole new perspective. You feel refreshed. There’s a sense of being forgiven from your previous perspective, but you truly look at the world in a new way. My perspective on everything changed. And I’m immensely thankful for it. It altered everything, including my relationship with my family. And we moved to Maine from the city of New York. We felt closer to the Earth, which is a gift. We felt renewed. It gave us balanced. It really was a life-changing experience.

Fox News: What has kept you going as an artist, especially within an industry that is constantly evolving?
Stookey: I was very fortunate in the late ‘70s to realize that the most important thing to me was my family and not a career. So I set the bar low *laughs*. But in terms of career success, that’s not to say that Peter, Mary and I didn’t miss the joy, the attention and the rewards that came from the performances of the ‘60s. And then when we got back together again in the ‘80s and ‘90s until Mary passed away in 2009, we had a very loyal, interested and involved audience. 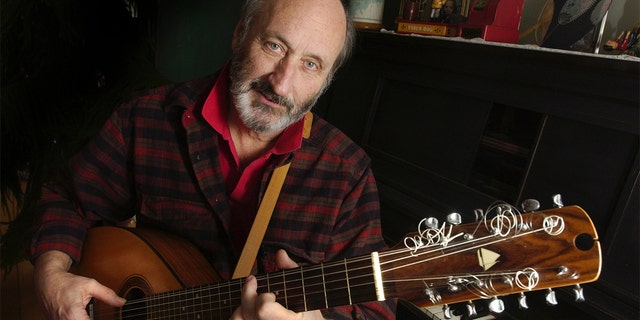 Noel Paul Stookey shows off a 12 string guitar custom-made by a Maine artisan, circa 2003. Stookey spends much of his time at his home in Blue Hill, Maine.
((Photo by John Ewing/Portland Press Herald via Getty Images))

I have [the drive] as long as I’ve still got something to say musically… I’m 83 years old now. And I’m thinking about my next album. I’m co-authoring a lot more than I used to. I’m looking at the talent around me and learning how they’re so astute, so clever. It’s been fantastic, really.