CES has brought us some some bonkers bits of gaming tech in years gone by. Last year, it was Dell’s Alienware UFO Switch-alike. The year before that, it was Razer’s HyperSense prototype, a complete haptic feedback system designed to put you right in the centre of your gaming experience. This year, Razer have gone one step further and created what they’re hoping is going to be the ultimate gaming chair. Currently codenamed Project Brooklyn, this mad thing has a fold-out 60in OLED display that wraps around your head, and transformable arm rests that double-up as a keyboard tray. And, of course, it has Razer Chroma LEDs aplenty in the seat and base to light up your room with the same colours as what’s onscreen.

Razer have told me it’s likely still a few years away from completion at the moment, but the idea behind Project Brooklyn was to create a fully-fledged entertainment ‘powerhouse’ that wouldn’t look out of place in any part of your house. That’s because most of the time Project Brooklyn looks just like an ordinary gaming chair, not some colossal rotating chair mega rig like Acer’s terrifying Thronos contraption. Instead, it’s only when you sit down and press a special button that its 60in OLED display unfurls from the back of the chair, and its 4D armrests roll out to create its all-important keyboard table. Have a watch of the video below to see how it works in (theoretical) practice.

The chair itself takes several cues from Razer’s existing gaming chair, the Razer Isku, which first came out in October last year. Made from carbon fibre, Project Brooklyn has a similar leather-stitched seat and high-density foam cushions to help support your individual body shape, but it also incorporates some of that haptic feedback Hypersense tech that Razer debuted a couple of years ago so you can ‘feel’ the explosions and in-game effects rumble down your spine. I remember their Hypersense chair being pretty novel when I tried it out a couple of years ago, and Razer have said that Project Brooklyn will have several haptic feedback modules that you can activate independently depending on your preference.

Of course, how practical it’s going to be in everyday use is very much up for debate. As you might have spotted from the video (and certainly from the image below), there are several cables running out of the chair (using the same beautiful cable management as Razer’s excellent Raptor monitor, I might add) that it connect up to your PC. While that’s fine for one-stop gaming hub, I also use my PC for work, and I’m not sure I’d want to ensconce myself in it writing up word documents all day – although I’d be more than willing to give it a try given the sheer size of that wraparound display (think of the spreadsheets!). Really, though, it sort of implies that you’ll need a dedicated gaming rig to make the most of it, which may curtail its appeal somewhat. 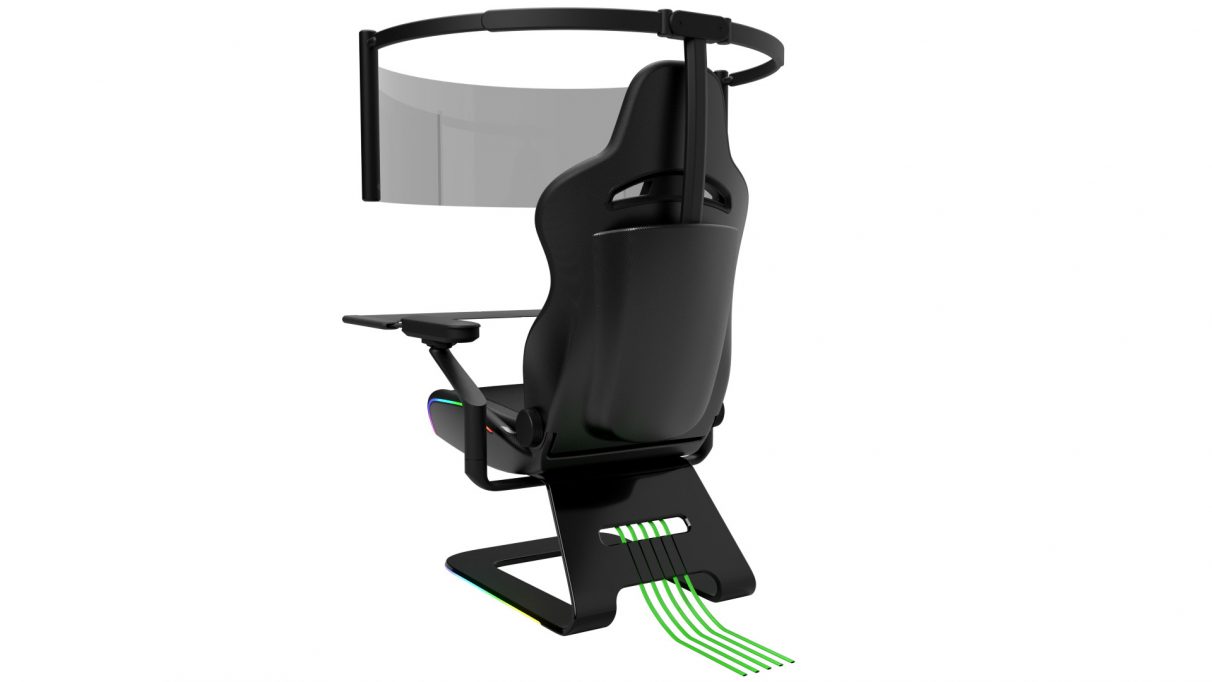 Still, as a pure gaming concept it’s definitely still preferable to a giant Thronos-style chair, and just to make sure you know it’s made by Razer, it’s got built-in Chroma LEDs around the edge of the seat and all along the side of the base. As with all of Razer’s Chroma bits, you’ll be able to sync the chair’s lights to all your other Razer peripherals should you own any, but Razer have also said that Project Brooklyn’s LEDs will be able to mirror the colours of what’s going on onscreen, too.

In my advance press briefing, the example they gave was finding a legendary drop in Diablo IV (even though Diablo IV hasn’t been released yet). If you stand in the golden light, say, the LEDs on the base of the chair will turn the floor around you gold as well. It’s a similar concept to Philips’ Ambilight tech that you sometimes see on gaming monitors, only here it would help illuminate your carpet instead of a wall. Of course, how much you’ll be able to see said lighting outside of the wraparound display (especially in broad daylight) is anyone’s guess right now, and I’ll be keen to see how it works in practice once it’s closer to actual production.

It’s a bonkers concept, but one I’m really quite excited to try out in the flesh. The idea of a giant 60in display emerging from the back of the chair and descending in front of my face is a heck of a lot more slick and cool than having three 27in monitors strapped to an enormous mechanical arm a la the Thronos, and it’s probably the first time I’ve looked at one of those bendy, roll-up OLED screens and thought, “Huh, that’s actually pretty darn nifty. There is a use for this ridiculous piece of tech after all!” Let’s just hope it doesn’t cost the earth once Razer actually get production up and running.