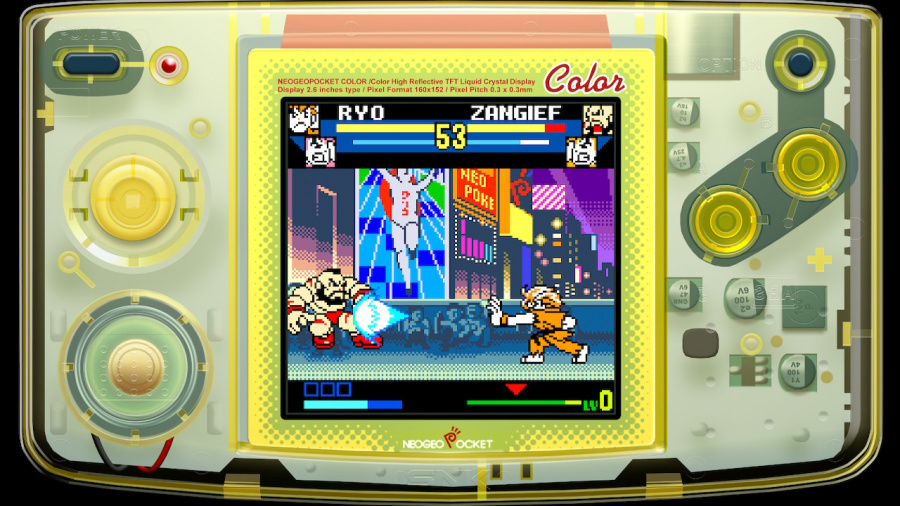 Once upon a time, the battle between Capcom and SNK was real. During the early ’90s, the two companies – each dedicated to the evolution of the fighting game – embarked in a tit-for-tat cold war.

SNK’s Ryo, an orange gi-wearing approximation of Street Fighter’s Ryu, ended up in Capcom’s official Street Fighter II: Champion Edition artwork as a downed opponent. Not only was the orange gi present, but the fighter, face hidden beneath Sagat’s mighty grip, sported a ponytail similar to Art of Fighting’s Robert Garcia. SNK responded by placing a series of statues resembling Street Fighter II’s Guile, Fei Long, Zangief and Akuma in the background of a King of Fighters ’94 cutscene. Rugal Bernstein, the game’s final boss, declares them statues of fighters he has defeated. A year later in 1995, Capcom revealed secret Street Fighter Alpha combatant Dan Hibiki: a slapstick, crying, parody amalgam of Art of Fighting’s leading duo.

The companies even warred over staff, with Street Fighter director Takashi Nishiyama leaving Capcom for SNK at the end of the ’80s to create the Fatal Fury series. As head of development for SNK it was Nishiyama, who – aware that SNK was close to bankruptcy – eventually brought the idea for a crossover to Capcom’s Yoshiki Okamoto (Street Fighter II). The rest is history, and the crossover birthed a host of titles between 1999 and 2003; some SNK developed, others by Capcom. Before the arcade releases and subsequent Dreamcast and PlayStation 2 ports, the gala kicked off on SNK’s Neo Geo Pocket with SNK vs. Capcom: Match of the Millennium.

Stylistically carved from the same mould as the rest of the Neo Pocket’s fighting game catalogue, SNK vs. Capcom: Match of the Millennium features a handpicked line-up of expressive pint-sized SNK and Capcom favourites. Exceptionally presented, the introduction flashily showcases the clashing casts: SNK’s Ryo and Capcom’s Dan Hibiki comically locked in dragon punches, and Ryu’s archetypal into-the-screen fireball whisking you to the title screen.

Plucked from the Street Fighter, Darkstalkers, Samurai Showdown, Fatal Fury, and King of Fighters universes, the game boasts 18 immediately available characters with a further 8 to unlock, bringing the total playable roster to a whopping 26. In addition to the central Tournament, ‘Olympic’ mode offers up various condition-based endurance challenges, and a set of special mini-games from the worlds of Metal Slug, Ghosts ‘n Goblins, Samurai Showdown and Darkstalkers. These consist of simple score-based distractions that range from alien shooting galleries to Bemani-style reflex tests with a choice of recognisable music tracks. In the original version of the game on the NGPC, points gained during these games could be transferred to the Sega Dreamcast (via a link cable which is now extremely expensive) and used in Capcom vs. SNK: Millenium Fight 2000 to unlock extra fighters.

Beyond the springy mechanics, SNK vs. Capcom: Match of the Millennium’s aesthetic is beautiful. An inspired colour palette stretches the Neo Pocket to its limits, and the game’s menu screens pop with detailed character portraits and superb graphical arrangements. Stage backgrounds are drawn from the far corners of the SNK and Capcom pantheon, and character music themes play appropriately depending on who you face off against.

In a game already crammed with content, you can approach the Tournament mode in either a traditional 1 vs 1 setup; a 3 vs 3 team battle (in the style of King of Fighters); or a real-time Tag Team option in the vein of Marvel vs. Capcom. There is also a choice of three super gauge charge styles plucked from the Street Fighter and King of Fighters series.

Each character fights a specific rival at the fourth stage bout, triggering a true last boss in the form of either Evil Ryu or Orochi Iori, and good or bad endings depending on whether or not the rival is defeated. The game’s good humour regarding the SNK and Capcom rivalry is nice to see, with plenty of thought put into the various cutscenes and pre-bout exchanges. For example, when Ryo and Dan finally meet, Ryo demands to know why Dan is wearing his clothes.

Although it does feel like the AI is marginally improved over some of the console’s earlier releases, SNK vs. Capcom: Match of the Millennium still suffers from being far too easy on default settings, and then quite frustrating during true last boss encounters. It’s a breeze to defeat the M.Bison and Geese Howard team-up; but Evil Ryu and Iori can be troublesome, sporting aggressive attack AI and massive damage output. Trying to win ground against them in team battle mode, where they regenerate a large portion of health per round, can be very challenging.

A Switch specific issue is that the analog stick is sub-optimal compared to the Neo Geo Pocket’s original micro-switched stick. Getting dragon punches to fly can be overly tricky in the heat of battle, making it all feel a little imprecise. You might want to reach for an alternative pad or stick if you have one, especially when engaging in two-player battles.

Criticisms levelled at the Switch’s previous Neo Pocket ports remain unaddressed. There is no on-the-fly move-list available from the sub-menu, leaving you to laboriously load images of the game’s manual with no quick indexing (and it doesn’t even include the 8 unlockable characters). The external presentation is fine, with the game playing in the correct aspect ratio, a few nice bezel options and a filter to tinker with – but there’s very little in the way of unique extras. An option to map the game’s four attacks to four buttons has once again been criminally overlooked.

Despite some re-release shortcomings, SNK vs. Capcom: Match of the Millennium remains not only a charming piece of history, but a comprehensive fighting game with impressively taut elasticity. Bursting with move-sets that accurately mirror the arcade counterparts from which they’re derived, it represents the moment that a legendary rivalry thawed out and shook hands, and a fanfare for SNK’s excellent but ill-fated handheld. There also remains something special about having so many faces from so many different series occupying the same screen space, and in such good spirits. Seeing pocket-sized Kyo and Chun-Li battle it out on her Great Wall stage or Ken and Ryu’s fireballs trailing across Krauser’s cathedral is an experience worth revisiting. It’s an object of both its time and format, and you need to be prepared for that; but SNK versus Capcom? That really is the match of the millennium.